The below image encapsulates everything #TheGarageDoor was mean’t to be about and why we all got involved.

So to begin, #TheGarageDoor was a two series music show for up and coming UK music artists with a particular focus on the London Music scene. Series 1 was filmed at the tail end of 2013 and the first half of 2014.

The idea for Series 1 was simple, two tracks, an original and a cover and a short interview. Now that doesn’t sound much but with time constraints and a freezing cold Garage it wasn’t so straight forward, so in the end it often ended up being a pretty frantic few hours!

All of us were there of the the music and we knew that through team work, organisation and just a general air of friendliness and calm we would get all the sessions to run smoothly and make it enjoyable for the artists.

Series 1 was filmed in my friend Alex’s garage who was also the producer, I did all the recording and mixing work, there was the duel talents of Marcus and Cebo from Fresh Take Media behind the cameras and finally Tasha who did the interviews and booked in some of the artists we featured.

It was a bit of a tight squeeze in the garage sometimes with a group of up to four artists, 2 camera guys and me sitting on the floor trying to make sure people didn’t move my microphones too much or stand on my laptop!

I’ll admit it did get pretty chilly in there as we were recording in the depths of January and February but the upside of the cold was we got to work with some incredibly talented musicians and that was quite enough for me. Though, the endless supply of tea and excellent bacon sandwiches in the morning was an added bonus.

Some of the brilliant artists we worked with for the first series included: Dora Martin, Ray Jones, Jordan Morris, M.O and more. 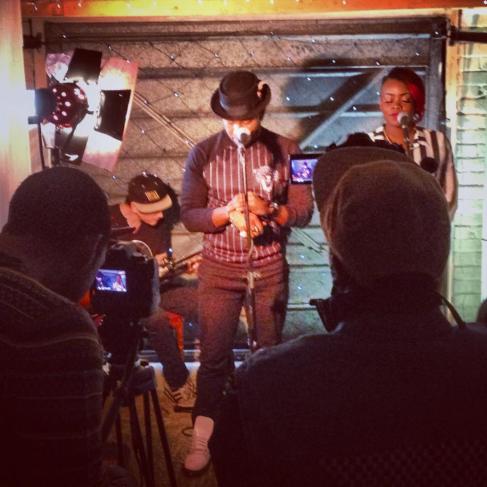 All the artists were fantastic, super professional and fun to work with. I’m not going to pick a favourite moment or artist because everyone was so good and the performances were always spot on. I’m the kind of engineer that if you are friendly and polite then I will have all the time in the world for you to get it right. After all it is your song and fortunately that is the attitude I could take with all of our artists.

Series 1 was a really fun time and despite the cold (though I always wore shorts) it was a great project to work on and even though the garage is now filled with bit and pieces from Alex and her housemates we had some fun times in there.

Of course though it wasn’t the end, we still had a second series to film….

**To Check out our videos and the insanely talented artists please visit this page, #TheGarageDoor on Youtube or our Soundcloud page**

The Series 1 Team and Dora Martin